October is National Domestic Violence Awareness Month, which first began in 1981 by the National Coalition Against Domestic Violence as a Day of Unity to connect battered women’s advocates across the country. Domestic violence affects millions, both women and men, of every race, religion, culture and status. It’s not just punches and black eyes — it’s yelling, humiliation, stalking, manipulation, coercion, threats and isolation. It’s stealing a paycheck, keeping tabs online, non-stop texting, the constant use of silent treatment, or calling someone stupid so often they believe it.

Since the Violence Against Women Act passed in 1994, we’ve come a long way.

This landmark legislation, led by then Senator Joe Biden, combined new provisions that hold offenders accountable and provide programs and services for victims. Between 1993 and 2010, the overall rate of domestic violence dropped nearly two-thirds and state laws have reformed to address issues such as dating abuse in the workplace, stalking, employment discrimination and more.

Nearly three out of four Americans personally know someone who is or has been a victim of domestic violence. And unfortunately, no one knows better of the traumatic impact than our very own Kallie Weas, MA. 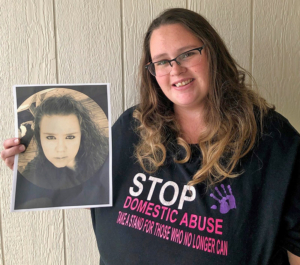 Kallie’s 23-year-old sister, Katie, and six-month-old niece were killed on Oct. 23, 2013 by Katie’s abuser-boyfriend. Last week, staff wore purple in support of Domestic Violence Month and Kallie and her family. Kallie’s family is celebrating their seventh-year anniversary. Purple ribbons were distributed to patients and staff.

“My sister and her baby daughter were killed by her abuser via a head on collusion,” Kallie reflects. “This was so devastating for all of us, including the innocent man driving the other car, who survived. To heal and remember Katie and her daughter, we launch a balloon for each year she and her daughter are no longer with us. In addition, my sister and I focus on educating people about domestic abuse.”

“We often only associate October with “pink” and Breast Cancer Awareness Month,” Amy adds. “But for those impacted by domestic violence, including family members of the abused, National Domestic Violence Awareness Month is an opportunity to educate and bring awareness of this important public health priority. We applaud Kallie’s efforts to encourage conversation about this issue.”

Kallie can’t agree more. “I felt the best way to honor my sister is to make sure my colleagues, friends, patients and community better understand the signs of domestic abuse and what to do if a person is being abused. My older sister posts daily stats and information about domestic violence on social media. We each do something in our own way. I just want our staff and patients to know the signs and think about this issue—and not have to live through our nightmare.”

Kallie urges everyone to become informed, know the signs and take a stand. Please support survivors (and their families like Kallie’s) and speak out against domestic violence – not just in October but year-round. 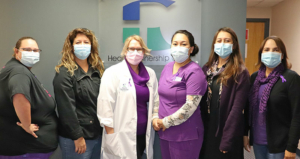 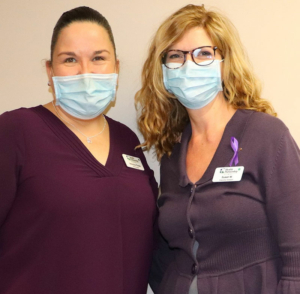 Why do people in an abusive relationship stay with their partners?

There are a few reasons:

Are you in an abusive relationship?

Sometimes, people don’t know if they are really in an abusive relationship because they’re used to their partner calling them crazy or making them feel like all the problems are their own fault.

Here are a few ways to know if you’re in an abusive relationship that you need to get out of.

Signs Someone You Know Is Being Abused

Are the Signs Different for Men?

They’re often the same. And that’s true whether the abusive partner is a woman or another man. It may be emotional or verbal, like taking away keys, medicines, or other essentials. Or things like constantly putting you down in public or on social media.

And it can be physical. To make up for differences in strength, abusive partners may try to attack you in your sleep, by surprise, or with weapons and other objects. They may also abuse your children or pets.

What to Do if You’re Being Abused

First, know that you deserve better and that this isn’t your fault. If you’re in an emergency, call 911.

You can also turn to friends, family, neighbors, your doctor, or your spiritual community.

Also make sure you have an emergency escape plan: