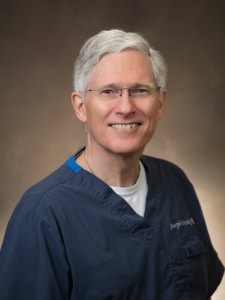 “Public health just resonates with me. I feel rewarded for the work and really enjoy connecting with people who need a helping hand.”

Patients should know that Joseph Wittig, DDS, will never judge them regarding their dental care history – or lack thereof – knowing that years can pass between visits. “My job is to explain to people what I find and what their options are, so that they can make the right decisions for themselves,” he says.

That approach has served Dr. Wittig well in public and private practice since he began seeing patients in his native Wisconsin in 1982. His career has included nearly all forms of dentistry including exams, evaluations, fillings, crowns, root canals and more. He has also served as a trainer, educator and consultant to anesthesiologists in North America, Europe and the Middle East.

In the United States, he served urban and rural patients focusing on children’s dentistry. He moved to Kansas City in 2014 to join Samuel U Rodgers Health Center, where he later became dental director.

Patient education delivered in a comforting and reinforcing manner is a priority for Dr. Wittig. “Unfortunately, through no fault of their own, public health patients have a low ‘Dental IQ’ – lack of awareness of threats to their teeth. Oftentimes, they weren’t taught well, or they let early-childhood experiences become embellished in their mind, resulting in fear,” he says. To overcome that, he lets them speak freely about fears or concerns before focusing on their oral care future. Dr. Wittig wants the community to know that it is never too late to see a dentist about oral health. “We don’t want to just treat oral disease, but to prevent it,” he adds.

Dr. Wittig earned two bachelor of science degrees and a Doctor of Dental Surgery degree from Marquette University in Milwaukee, Wis. Dr. Wittig joined Health Partnership in 2022. When not seeing patients at the clinic, Dr. Wittig enjoys time with his wife of 40 years, their three daughters and playing bass guitar in several local bands.

He serves people of all ages at our Olathe and Ottawa clinics.