As Veterans Day nears, Health Partnership Clinic (HPC) reflects on the proud men and women who have served in the U.S. military. We salute and thank them for their bravery and service. It’s also a time to pay tribute to our own.

Oxana Blas, Medical Assistant, is currently in the Kansas Army National Guard, Clinic Director and Risk/Compliance Officer Lee Champion, RN, served in the Navy for more than nine years and resigned as a E6 Petty Officer 1st Class, and Keith Petite, Technical Account Manager, Triggerfish Corp., assigned to the clinic, retired from the U.S. Army as Sergeant First Class after 25 years of service. In addition to Oxana, Lee and Keith, there are many family members of our staff who have served or are currently serving.

HPC is recognizing Veterans Day, Wednesday, Nov. 11, by sending thank you cards to our veteran patients and to staff’s family members. In addition, the Olathe clinic will be decorated with flags, and resources and flag pins will be available at all sites. Staff will be proudly displaying photographs of their loved ones in the Olathe lobby and will enjoy red, white and blue cookies. We are also sharing the stories of two members of our team, Oxana and Keith.

While friends were busy completing college applications, Oxana Blas’ plans were undecided. She needed a break from school yet yearned for a challenge. A few months before graduating from Blue Valley West High School in 2018, she met a National Guard recruiter, and her life changed.

Before long, Oxana enlisted in the Kansas Army National Guard and headed to a 10-week basic training at Fort Leonard Wood, Mo.

Her next destination: Fort Sam’s Houston, San Antonio, Texas. Here she attended a grueling 16 weeks of advanced individual training (AIT) and  received her EMT certificate and field training. During this intensive training, Oxana learned skills in normal and emergency situations, including IVs, medication administration, airway treatment, equipment sterilization and casting broken bones. After that, she received her Military Occupational Specialty (MOS) as a Healthcare Specialist Medic.

“After my AIT training, I knew I was in the right MOS,” she reflects. “I really love helping people and the best way to do this is through health care. And the Guard gave me structure, support and opportunity.” 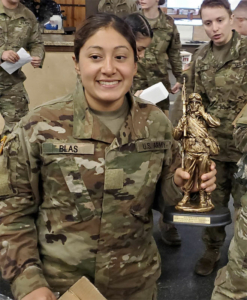 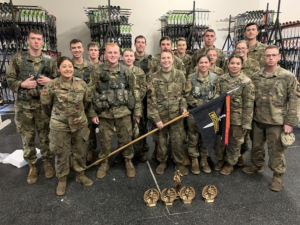 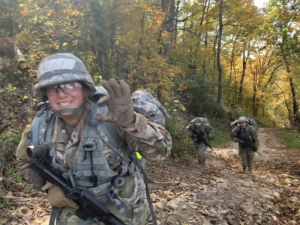 As a National Guard, Oxana is committed to one weekend a month, two weeks in the summer and ready to respond when needed. In 2019, she decided to take advantage of the Guard’s education benefit and enrolled in Kansas State Army ROTC program in Manhattan, Kan. She particularly enjoyed the competitions and comradery of her fellow soldiers.

The year was going well and then COVID-19 hit. Oxana finished her freshman year at home but opted not to return in the fall. Soon after she was activated in the spring of 2020. Her assignment: To administer COVID testing to inmates at the Lansing Correction Facility in Lansing, Kan. In addition to testing, she and three other medics were responsible for monitoring inmates’ health, distributing medications, etc. That lasted two months. Next, it was time to look for a job and that lead her to Health Partnership Clinic in July 2020.

“HPC seemed like a good fit for me,” she notes. “I knew the community, it was close to home, and I thought it would be challenging since I’ve never worked in a clinic setting. The skills I learned in the Guard are helping me in my new role as a medical assistant (MA).” Her supervisor, Lee Champion, RN, Clinic Director and Risk/Compliance Officer, couldn’t agree more.

“As a Navy veteran, I knew that Oxana would bring a wealth of skills and experience in her short time with the Guard,” she explains. “Time management, leadership and communications are three valuable skills you learn early in your military career. Her patients and coworkers appreciate the way she develops relationships, communicates clearly and how she takes initiative and helps the team. In addition, Oxana is bilingual which is another helpful skill.”

“The person I was and the person I’m today are two different people. My short time in the Guard has had a lasting effect on me. I’ve grown in so many ways. I feel like I’m a better person—I listen better, can take criticism better, and I’ve learned that it is not just me but the team. Your actions don’t just affect you, and it encourages me to be more considerate of others. Serving in the military and working at HPC is very humbling, and I’m doing something greater than myself.”

Oxana’s short term goal is to complete her MA certificate. Long term, she sees herself completing college and officer training and becoming a firefighter/medic. No matter her path to success, she always lives the Guard’s motto, “Always Ready, Always There!”

The United States National Guard is part of the reserve components of the United States Army and Air Force and each state’s National Guard unit is controlled by the governor in time of peace but can be called up for federal duty by the president. The Guard helps soldiers and the community during disasters and civil unrest at home and overseas. 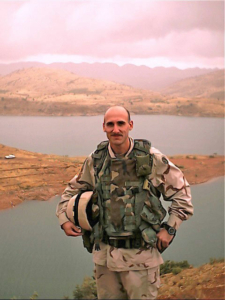 Be all you can be and have fun at it. After travelling to 23 different countries, three deployments, commanding 30 or more soldiers and being exposed to many interesting jobs, Keith Petite has learned a few things about life and people.

And these skills have come in handy as HPC’s IT guru. As the Technical Account Manager for Triggerfish Corp., which provides IT support to the clinic, Keith spends most days troubleshooting technical issues, setting up emails, installing programs and ensuring all systems (everything from computers to internet to telephones) are a go for our providers and staff.

Long before joining the clinic, Keith served in the U.S. Army. He retired in 2015 as a Sergeant First Class after 25 years of combined service Active & Reserve.

“My time in the Army taught me three very important skills that I use today,” Keith says. “When working with people—no matter their walk of life—you must be very patient, unbiased and nonjudgmental. I also learned how to manage and balance the personalities of individuals, their personal life crisis such as domestic violence, personal strife and financial burdens coupled with the goals & missions of your command. These skills have been invaluable.”

Keith knew firsthand about the military. His father and grandfather served in the Navy and his uncle in the Marines. As a “Navy Brat,” Keith grew up on several military installations, liked the life and always asked lots of questions of his military relatives. “I chose the Army because I liked the uniform and the concept framework of the Army, particularly with the specialized teams.”

“I knew I wanted to travel and experience all I could,” he adds. “So, I shared my plan with my family, and I never looked back.” While still in high school Keith enlisted in the Army at 17 years old. After completing high school, he shipped off to training in June 1989 with a contract as a Satellite Communications Specialist.

As a Satellite Communications Specialist, Keith worked with early technology where he used teletype devices and radio waves to transmit and receive encrypted data.   That data was then deciphered or decrypted and sent via radio waves through satellite. “It was a very secure way to communicate sensitive information, and we utilized various encryption methods to perform various retransmit functions. “It was nothing like it is today!”  My first duty assignment was South Korea where my job was to go on missions and transmit and receive signals and send those up the chain.”

In December of 1990, Keith left Korea bound for Fort Riley, Kan., stopping at home for some personal leave to reconnect with family in San Diego. “During my leave at home over the holiday, I was ordered to report early and prepare to ship to Iraq. I was in Iraq by Jan. 3 and just 19 years old.” Operation Desert Storm was a war waged by coalition forces from 35 nations led by the United States against Iraq in response to Iraq’s invasion and annexation of Kuwait arising from oil pricing and production disputes.

After completing his first three-year tour of Active Duty, Keith elected to transition to the Army Reserves and started working locally and settled in the Fort Riley area. He got married in 1993, started a family and enrolled at K-State University in 1995. His goal was to earn a Fire Sciences degree.

During this time, he was reclassified to Army Firefighter/EMT and deployed to Bosnia for nine months. He was selected for the Active Guard Reserve (AGR) Program. This program involved reservists and guard members who are on active duty to facilitate the day-to-day functions of the Army Reserve’s process. At this point, he rejoined as Active Duty and was responsible for all facets of fire operations including training, finance, maintenance, IT and overseeing 24 soldiers.

Then came 2010; Keith was deployed again to Iraq as part of Operation Iraqi Freedom. He and his team were responsible for airfield firefighting operations in northern Iraq & Mosul.  Keith’s primary job was Command & Control of the Firefighter teams while providing fire protective services in their area of operations.  Everything from helicopters, to planes & tanks and pulling bodies out of wreckages as well as fires caused by soldiers in mess tents and barracks.

After returning home from Iraq In 2011, Keith was selected to reclassify as an Army Recruiter and after a few years he was transferred to Des Moines, Iowa. His family remained in Kansas and for three years, he traveled home each weekend to be with family.   He retired in 2015 as a Master Trainer in US Army Training and Doctrine Command (TRADOC).

After retirement, Keith opted to get back into IT, working for various companies and as a private consultant. He joined Triggerfish in May 2020 and was assigned to HPC.

Keith says he is fortunate to have a job that he loves and enjoys ever day. “I’ve taken all of the skills the Army gave me and merged them into something that is fun, and IT is fun for me,” he reflects. “I remember my Dad saying, ‘If you can’t have fun while you work, don’t work.  Do what you enjoy.’ I live by that motto.”

When Keith joined the Army in the late 80s, their motto was “Be All You Can Be,” and he has certainly fulfilled that.