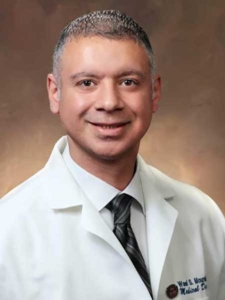 Influenza (flu) is an illness with a long history in the United States. It is caused by the influenza virus of which there are two main types that cause the seasonal flu — types A and B. The influenza virus causes respiratory infections, which means that it infects the nose, throat, chest and sometimes the lungs.

Since 2010, there have been several thousands of deaths and hundreds of thousands of expensive hospitalizations in the United States due to the flu. It is an illness that can be especially hard on children, pregnant patients and older adults. The best way to fight against the flu is to get an influenza vaccine. What is the “second best” way to fight against the flu? To be with others who received the influenza vaccine. 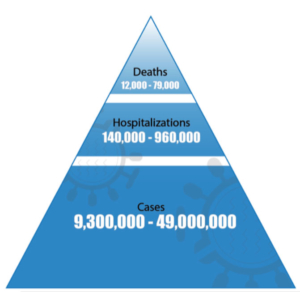 The flu is different from the common cold. It typically comes on suddenly and you feel more feverish, although it is possible to not actually have a documented fever. Other symptoms include muscle and body aches, sore throat, cough and runny or stuffy nose. Diarrhea is more common in children.

How the Flu Spreads 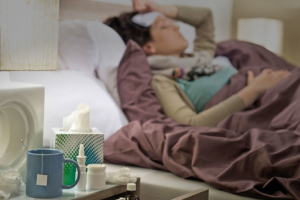 Imagine a busy airport, and someone feels that they are coming down with a cold and runny nose when they are beginning to have symptoms of the flu. That person is in a rush to catch a flight and quickly touches his nose with his hand. Because the flu virus was present in his nose, it is now on his hand. Now imagine that he is coming down an escalator and puts his hand on the handrail. The virus is now on that handrail! The influenza virus can live on hard surfaces for up to several hours.

Now imagine that a young mother traveling with her two small children are coming up the same escalator and she puts her hand on the same spot as the previous gentleman. Now the flu virus is on her hands. While she is waiting for her flight at the gate, she scratches an itch on her nose, which causes the flu virus to infect her nose. And because she has two small children that she needs to hold, their hands and noses may be infected as well. Now imagine that they all board the plane together, and all the surfaces and other people that are now exposed to them.

This is a good example of how quickly the flu virus can spread.

There are three main ways to avoid getting a severe case of the flu:

1) Healthy Habits:  This means staying home when you are sick. It is also important to cover your mouth and nose when coughing or sneezing. If you must leave the home, wear a mask to prevent spread of the virus. Washing your hands is a very important and effective way to prevent the spread of the flu virus. Use soap and water, and if that is not available, then an alcohol-based hand rub would suffice.

2) Get Vaccinated: Everyone six months and older should receive the flu vaccine every year. The flu vaccine has been shown to reduce how severe the illness becomes, the number of doctors’ visits, missed work and school days and flu-related hospitalizations. It has also been shown to be lifesaving in children. Getting the influenza vaccine also protects those who are around you because if you are less likely to get the flu, then they are less likely to get it from you. This is called “herd immunity.”

3) Antiviral Medications: If someone is very sick from the flu, or they are in a high-risk group then it is important to visit a health care provider. Antiviral medications are very effective when taken during the first 72 hours of the illness. High risk groups include being pregnant, or having asthma, diabetes or heart disease.

The flu is a very contagious disease and can make us and our loved ones very sick if not attended to properly. A great resource for more information is the Centers for Disease Control and Prevention website https://www.cdc.gov/flu/index.htm.