Rachel Olsen is a third-year Osteopathic Medical Student at Kansas City University of Medicine and Biosciences in the Community Health Center Track and an Associate Adjunct Professor at Johnson County Community College. Rachel completed four months of rotations as a student in the areas of Psychiatry, Pediatrics, Family Medicine and Community Health Center Administration at Health Partnership Clinic in Olathe. 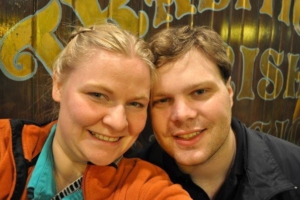 When I was asked “what do you want to be when you grow up?”, I was dead set on becoming a scientist and professor. My dreams were filled with a future composed of hours spent at the lab bench or microscope discovering incredible cures for the ailments of modern man. Though my own plans did not originally include hopes of becoming a doctor, as so many have, I was drawn to the art of medicine during my graduate school years.

Little did I know how complex such a decision would become and how much my life would be changed.

I was faced with not only deciding which schools to apply to, but even more so with the decision as to whether I would become an Allopath (MD) or an Osteopath (DO).

The question boiled down to: which medical philosophy fit my own goals and beliefs? To answer this, I had to consider carefully these two pathways and make sense of the similarities and differences between them. Upon setting out on this quest I literally had NO idea what a DO was. I had never heard of any type of Doctor aside from MDs.

So, I took it upon myself to do some research, something I was very familiar with, and find out more. I am certain I was not alone in this shocking realization that there was an entire medical philosophy to which I was completely naïve. I decided I just had to share a little of what I have learned along the way in hopes of helping potential patients in choosing what they want in a physician and what will meet their personal needs and expectations in the realm of medical care.

Allopathic and Osteopathic schools alike produce licensed physicians whose training begins with foundational scientific knowledge. In many ways both pathways, and the physicians they graduate, are extremely similar. Both degrees build upon basic science to develop the methodology and techniques used in clinical medicine.

Graduates of either program may choose from the same list of potential specialties, ranging from primary care to orthopedic surgery, and are licensed to prescribe medication. However, the greatest differences exist in the approach to practicing medicine, as well as some of the tools used to do so.

I thought a simple comparison table may help clarify some of these aspects.

Ultimately, practitioners of either philosophy are capable of providing high quality health care to patients in need. Both tracks spend the same number of years in training and have the same fundamental foundation in the basic sciences. The addition of the OMT therapy gained in the Osteopathic track and the perspective of viewing the patient in a holistic manner simply deliver additional tools and techniques to provide for the needs of the patient.

For these very reasons, I chose to pursue the Osteopathic philosophy of training, as I hoped to use every possible tool and technique available to improve the health and well-being of my future patients. I am confident I made the correct choice and have been thrilled to have the amazing opportunity to train in such an incredible profession. I hope that future patients may come to better appreciate Allopaths and Osteopaths alike and understand that, regardless of the title or degree, all physicians have the patient’s health and well-being as their top priority.